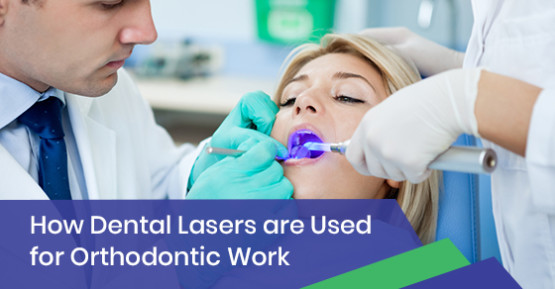 How Dental Lasers are Used for Orthodontic Work

With new technologies in modern dentistry, patients can enjoy procedures and techniques that are more convenient, less invasive, safer, and more effective with faster healing and recovery times. LASER technology (Light Amplification and Stimulated Emission of Radiation Therapy) is one of the new discoveries in medicine and dentistry that has found its way into orthodontics. Dental laser technology in Edmonton has resulted in decreased treatment timings, less pain and more comfort during treatment, better patient satisfaction, and superior results.

Thermal ablation, the process through which lasers separate tissue, has several applications in orthodontics, including:

When the laser energy is targeted on the surface of tooth enamel, it causes localized melting and ablation, and subsequent enamel removal (etching). Depending on the type of laser used and amount of energy applied, the laser beam can remove enamel and cause surface roughening to a depth of 10–20 μm to facilitate the bonding of orthodontic appliances.

light-cured adhesives have an extended placement time that allows for more precise bracket positioning. One of the biggest challenges of using adhesives to set brackets is the 20–40 seconds required to set each bracket with a curing light. While the shear bond strength of light-cured adhesives is similar to that of chemically activated adhesives, it increases considerably between 5 minutes and 24 hours post-placement. Argon lasers can be used to deliver polymerization of composite resins and bond orthodontic brackets for faster and stronger bonds.

Lasers are successfully used in both acid etching and debonding of brackets, resulting in reduced adhesive remnants and heat generation for a fairly small increase in pulp temperature. This eliminates the risk of side effects from increasing pulp temperatures when debonding brackets from the enamel surface after orthodontic treatment. Generally, the use of lasers for bracket debonding helps to:

Ultimately, lasers provide a less painful and safer (reduced risk of enamel damage and failure) orthodontic treatment for the patient.

How a Laser Works

A laser refers to a focused source of light energy or electromagnetic radiation, which is known as a laser beam. Laser light energy is defined by three attributes:

A laser beam refers to a concentrated source of light energy comprising only one wavelength that travels in a definite direction, and all wavelengths of the laser light travel in phase. These attributes make it different from ordinary light, which is diffuse and non-coherent. Instead, laser light energy can be focused to target accurately and with high intensity.

The acronym “laser” describes the physics of how a laser beam is formed. A laser machine releases light energy whenever the laser medium is stimulated. This stimulation causes electrons to drop from a high energy state to a lower energy state, releasing light energy, through a process known as stimulated emission of radiation. The energy released is amplified before it exits via a collimated tube to deliver a concentrated source of light energy—the laser beam.

The artificial, amplified light energy released as a laser beam can be used to separate tissue by a process known as thermal ablation. Unlike a scalpel that slices, thermal ablation is an instantaneous process of absorption, melting, and vaporization, which results in tissue decomposition. As the target cells absorb the light energy, the temperature of the tissue rises rapidly, causing those cells to instantly undergo warming, welding, coagulation, protein denaturation, drying, and vapourization through a micro-explosion referred to as spallation.

The extent of thermal ablation depends on the amount of light absorbed, which is in turn influenced by:

Compared to the use of a scalpel or drill in traditional dentistry, lasers allow for gentle and virtually painless treatment. This makes laser dentistry ideal for patients suffering from dental anxiety. In addition, lasers don’t bruise surrounding tissues. This minimizes swelling and bleeding for faster healing and recovery so you can resume your normal daily activities faster.

Lasers in orthodontics are safe for patients of all ages. Schedule a consultation with Roots on Whyte Dental by calling us at 888-396-4932 or contact us here to learn more about how you can benefit from laser dentistry in Edmonton.