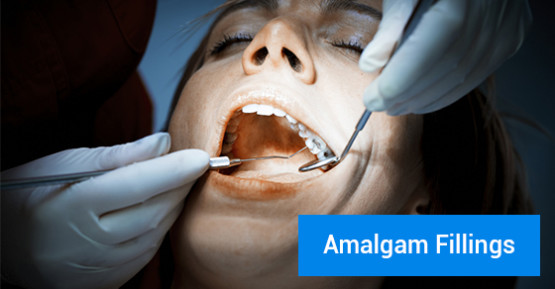 Amalgam fillings are made up of a combination of different metals including silver, mercury, tin, and copper. They are dark silver in appearance, which is one main reason more dentists have switched to tooth coloured fillings. Amalgam fillings are less expensive than other types of fillings, and they do hold up better to wear and tear over time, which is why they are still used in certain cases.

Some concerns have been raised over the safety of amalgam fillings, specifically over the mercury they contain. Mercury is a naturally occuring metal, yet if a person is exposed to high amounts of mercury, they may be at risk of mercury poisoning. Symptoms of mercury poisoning include anxiety, irritability, memory loss, headaches, and fatigue. Mercury poisoning is very serious and should be treated immediately. In some rare cases, patients have a mercury allergy, making them more susceptible to the negative effects of mercury.

In mercury amalgam fillings, the level of mercury is quite low and is unlikely to cause any negative effects. However, recent studies have shown that some mercury is released from amalgam fillings over time, which could be absorbed into the body. You may want to opt for a mercury amalgam filling removal, if you are concerned about this. Safe amalgam removal can be easily performed by your dentist. You may also want to have an amalgam filling removed and replaced with a different material for aesthetic reasons. Other common materials now used in place of amalgam include composite resin, porcelain, and gold. These are dependant on the specific case though, as composite resin and porcelain are more susceptible to wear and tear than metal amalgams.

If you have any concerns about mercury levels in amalgam fillings, or wish to have a safe amalgam removal performed, speak to your dentist today.